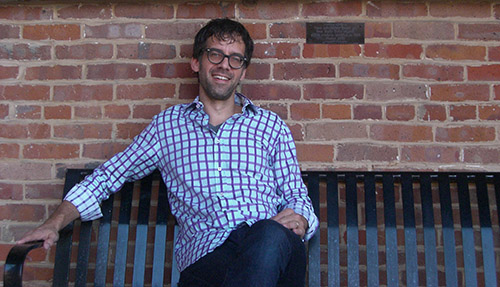 We recently interviewed one of the newest members of our faculty, Dr. Nathan Loewen. Read what he has to say about his interests, background, and new job as Assistant Professor and Faculty Technology Liaison.

Q: Where did you train? What are your areas of research and teaching interest?

A: My areas of research and teaching interest include religion in modernity, philosophy of religion, the cross-section of religious studies with international development studies, and higher education pedagogy.

I studied from 2002-2009 with Dr. Maurice Boutin at McGill University’s Faculty of Religious Studies. I went to study with Boutin at the suggestion of my Master’s advisor, Marta Frascati Lochhead (1953-2008), who did her graduate work with him, too. Between these two, I was introduced to religious studies through the lens of what some call “continental philosophy” (in particular: Nietzsche, Heidegger, Ricoeur, Derrida, Vattimo, Agamben, Sloterdijk).

My research interests upon arrival at McGill were to be strictly focused on thinking through a specific problem in the philosophy of religion from a Derridean perspective. And so, my PhD dissertation is indeed about Derrida and the problem of evil. From there, I have begun to think about how to historicize and globalize certain discourses among current philosophers of religion on topics such as evil, and, how “religious diversity” is taken to be a problem to be solved.

My approach to work as a graduate teaching assistant (GTA), however, was to interact with the widest variety of professors possible. I was a GTA not only with many Religious Studies professors, but I also assisted professors in the programs of South Asian studies, Northeast Asia studies and Economics. Most influential among these was Myron Frankman, for whom I assisted his “Introduction to Economic Development” course for three years.

This GTA work, combined with the experience of a six-week summer study program in Jaina philosophy in India, led to my interest in how scholarly paths cross between the fields of religious studies and international development studies. In 2008, I co-founded the AAR program unit on “international development and religion” and recently became part of the editorial team for a research series in that area.

Q: Where were you before you joined us here in REL? What were you doing?

A: I taught in the departments of religious studies and humanities at Vanier College in Montreal. There, I was teaching courses on world religions, philosophy of religion, ethics and development studies. Vanier is an exciting place to teach. The students are from a wide variety of experiences and backgrounds. I enjoyed hearing at least three or four languages being spoken as I walked from my office to class; we could look at a variety of sources (text, video, audio) because of the likelihood that someone in the room could translate in real-time. I also managed the “virtual team teaching network,” which connects geographically-separated classrooms in real-time. I really enjoyed the challenge of connecting students throughout Quebec to their cohorts around the world. The international context at Vanier and the cosmopolitan nature of Montreal society plays a large part in my interest to globalize discourses in the philosophy of religion. So much of what is presented in introductory textbooks makes students balk. Now, I know that “experience” is not something privileged over scholarship, and that folk understandings and taxons are not the trade of scholars. However, I do think something is wrong somewhere when scholarship has created – through historical and social developments, to be sure – an insularity that strikes participants and scholars alike as odd and unfamiliar.

Q: We hear you’ll be doing some work for the College of Arts & Sciences, what’s up with that?

A: Etech is the instructional technology unit of the College, and I will be their “faculty technology liaison.” My role at Etech is to bridge gaps between IT staff and faculty, particularly in the areas of identifying faculty needs, informing faculty of innovative approaches by their UA colleagues and recommending fresh strategies for classroom, hybrid, and online teaching. My role includes performing pedagogical reviews of the online courses offered by A&S, too.

Q: What sorts of classes might you be teaching in REL?

I’m really looking forward to the REL100 course. I think this is the most important course on the books. REL100 is where religious studies is sketched out, with the possibility that students will consider taking up REL as a major or minor in their studies. It also provides an exciting context for putting a test to new ideas for teaching and technology.

Other courses of interest to me are the following:
REL 101 Western Approaches to the Problem of Evil.
REL 209 Comparative Studies in Eastern and Western Religious Thought – I would take the “global philosophy of religion” approach that I am developing
REL 231 Twentieth-Century Religious Thought.
REL 228. Hy Of Christian Thought – I would take a “philosophical theology” overview approach; just to keep up my chops on the conventional approach to doing philosophy of religion
REL 321. Rel & Ident in South Asia – I would like to take a “religion and development” approach; questioning how and why actors in the modern development activities identify themselves or others as “religious” (i.e. NGOs, INGOs, civil society groups, national/regional/local political organizations)
REL 480. Seminar Religion In Culture – like REL 321, I would like to take a “religion and development” approach

A: Can I say “beer”? The variety is outstanding… Loosa Brews is wonderful. A close second is Northport, which also might not be eligible. Everything is within walking or cycling distance, and the trip to UA campus, taking the Jack Warner route, is wonderful.

If not, then I must say that the mountain bike trails, at Munny Sokal for example, are outstanding. I mean, I have never met a public pump track before! I don’t get out enough, but when I do I am all smiles. If you were to ask me which civic association I would like to join, it would be the West Alabama Mountain Biking Association.