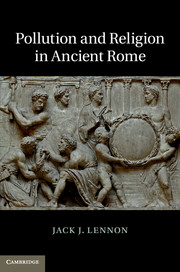 Mark Ortiz is a senior majoring in Religious Studies and New College
with a depth study in Political Ecology. This review was written as a final project
as part of Dr. Sarah Rollens’ course, REL 237: Religion and Identity
in the Ancient Mediterranean World.

In many societies, concepts of social order have been shaped considerably by notions of purity and pollution. According to scholar Jack J. Lennon, anthropologists have given discourses of pollution and purity more attention in recent years, yet, prior to this volume, there had been no comprehensive treatment of the subject in the world of Ancient Rome. It is this gaping hole in anthropological knowledge that Lennon wishes to fill with his book, which “explores the presence and perception of pollution in pre-Christian Roman religion” with a primary focus on the “ways in which Roman authors imagined, expressed and ultimately reacted to, things they thought were impure” (IX). Beginning with a thorough discussion of Latin lexicons of purity and its other, Lennon proceeds to show how various understandings and the regulation of bodily functions and effluvia are mediated through and by discursive elements. He concludes by honing in on Cicero’s speech De Domo Sua to further elucidate the connection between lexicons, the body, social order, and rhetoric in Ancient Rome.

The author opens the study with a few definitions. He provides an exhaustive list of the (many) Latin verbs and adjectives commonly used to express uncleanliness or pollution and purity or cleanness (29-44). He notes two words in particular, nefas and scelus, having to do, respectively, with the action of uttering the unspeakable or committing some sort of ‘wickedness’ (38-9). Notably, these two terms denote specific actions which are understood to upset the social order and which are, consequently, associated with pollution. Near the end of this chapter, he introduces a major argument of the book: framings of pollution and purity establish certain boundaries which help to separate the sacred from the profane and, thus, provide for the construction of sacred spaces and the designation of sacred humans (53). This distinguishing function of figurations of pollution and purity informs much of the rest of his study.

The second chapter focuses on birth, sex, and the many bodily processes often considered disgusting. Birth, for Ancient Romans, was a source of pollution much as it was for the Greeks. In fact, women were expected to avoid “sacred spaces” for a certain time period both before and after giving birth (58). With regards to sex, “token periods of abstinence” were common practice, as Romans felt that sexual activity, generally, incurred some impurities (63). He goes on to discuss menstruation, prostitution, incest, and, perhaps of most import to his overarching aim to account for the relationship between pollution and religion, the sexual purity of the Vestal Virgins (69-88). He ultimately displays an interesting feature of the economy of sex in Ancient Rome: sex was not associated with impurities in all situations, in some cases it was integral to religious proceedings, what mattered was the meticulous regulation (88).

Building on his examination of pollution and bodily processes, Lennon turns to ideas about blood in the third chapter. This chapter focuses on the “roles of blood within sacred space” and, specifically, on “animal sacrifice” (92). Following Mary Douglas’ lead, Lennon examines blood as a substance existing within a complicated social-spatial matrix, one in which there are “correct” and “incorrect” places for blood (92). Animal sacrifice in Ancient Rome represented one of the most prominent situations in which blood “should” be shed as a matter of religious obligation (101). The same could hold true for blood shed during times of bellum justum, or just war, in which bloodshed might be viewed in either a positive or negative light (122). While attitudes towards blood diverged from situation to situation, Lennon argues that the spilling of blood was carefully controlled (133). 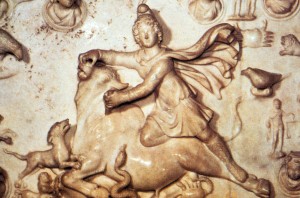 The fourth chapter turns from the vital excretory and circulatory fluids and processes of the body, to its inevitable fate: death. In Roman society, death was one of the most “powerful forms of ‘natural’ pollution” (136). To manage the pollutive qualities of death and the spirits of the dead, which were thought to further contribute to impurity, complicated festivals were performed annually to propitiate the spirits. The festivals often included rites of purification, typically occurring before and after the events, and protection during the proceedings (138). Lennon contends that the “focal point” of the various management techniques deployed immediately after death was the “corpse,” whose hasty decomposition was viewed as symbolic of social disorder and disintegration (165). Of interest to Lennon also is the way that dealings with and proximity to the dead was largely determined by class, with those in lower classes, most especially, undertakers being reviled for their close affiliation with corpses in a feedback loop of sorts (166). Unlike most other examples in the book, there is very little ambiguity of interpretation with regards to death, it was virtually always a pollutive occurrence (166).

Integrating the more general insights documented over the course of the book, Lennon concludes with a case study of a well-known speech by Cicero. By doing so, he aims to historicize his approach by placing Cicero’s speech and his many references to the concepts of pollution and purity just discussed into context (168). In describing a sexual scandal involving a tribune of the people, Cicero uses the language of sexual impurity which he then recycles to use again in critiquing this same tribune’s choice of a statue (175). He then proceeds to suggest that this tribune was engaged in incestuous impurities (180). Finally, Cicero claims that Clodius, the tribune in question, has polluted sacred spaces in his region of jurisdiction by allowing for gratuitous and poorly-managed bloodshed in the religious sites (182). In weaving together these many layers of pollution, Lennon argues that Cicero’s speech evidences the prominence of these ideas in the Roman world, their relative influence and discursive power, and the various ideas of good and desirable political activity encoded in these measures of cleanness.
Lennon’s treatment of purity and pollution in Ancient Rome could have been theoretically sharper. I felt that he too often presented a binary portrait of things. This tendency is particularly evident in his assumptions of the sharp division between pollution and purity, with one being uncritically associated with negative feelings and the other the opposite. This framework made available only a narrow range of analytical options, which he repetitively resorted to, precluding nuance although many sections of the study demanded it. In particular, his chapter on blood, a deeply ambiguous and substance gaining much of its pollutive or purifying significance from the situation-at-hand, could have benefitted from a more open and less structured approach.

Despite its weaknesses, Lennon’s text is an important contribution to anthropological studies of pollution and purity in Ancient Rome. I particularly appreciated his method of analysis, which moved from the discursive to the material and rhetorical, skillfully relating these many spheres of sociality in which pollution and purity were operative. Made especially clear by his introduction to the Latin lexicon of pollutive verbs and adjectives, it was not difficult to make the connections he was proposing between the ways in which linguistic and discursive elements structured notions of pollution and, consequently, its management and regulation. For this clarity, I applaud him, and would recommend this text as an excellent introduction for those wishing to understand the many dimensions of purity and pollution in Roman society during this time period.