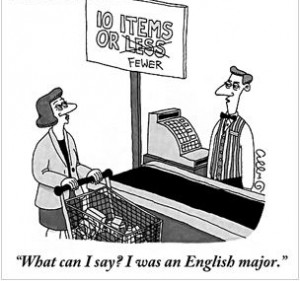 Catie Stewart is a sophomore at the University of Alabama from Madison, Mississippi. She is double majoring in English and Religious Studies.

Entering into my first year at the University of Alabama, I declared a chemical engineering major. I had always excelled in science and math in high school and had seemingly enjoyed the two catch-all chemistry classes I took my sophomore and senior years, so, to me and everyone advising me, it only made sense that I go into the field of chemical engineering. Sure, I had a real love for English and literature, but that simply wasn’t going to be a practical outlet for me in college. Engineering was my only option, even though I had never taken classes in the field.

After all, what would I ever do with a humanities degree?

But as I trudged through my calculus and chemistry classes freshman year, I began to realize something about my preconceived notions of what a college degree should mean. In high school, I had always thought of a college degree as a means to a specified end–I would learn about chemical engineering, and I would therefore go into the job market with the intent of finding a chemical engineering job. I thought that a college degree was all about the surface level content of the education. So I was convinced that the people majoring in engineering were the ones who learned technical content in their classes that was actually applicable to the job they would soon possess, and the people in the humanities were simply gambling with their time (maybe they would go on to teach English, or maybe they wouldn’t). For many people now view a degree in the humanities as a risk– hence the question: What would I ever do with a humanities degree? People are always wondering if a degree in the humanities is really worth it; why not go into a field such as chemical engineering and get a job in the subject you actually studied?

But I now think that people really miss the point of the whole process; I certainly did when I came into college just a little over a year ago. I thought that a degree in the humanities was too big of a gamble. I was told by many that my passion for English would meet nothing but a dead end at the close of four or five years as an undergraduate student. But my attitude changed drastically over the course of my freshman year as I began to take classes in the Department of Religious Studies. I learned not only that I enjoyed these humanities classes significantly more than the classes I was taking for my major, but also that what I was learning turned out to be more useful for the skills it taught me rather than just the content of the subject. I heard stories of graduates in the humanities and how their majors proved applicable in facets far and beyond a surface level, content-oriented job. Whether these graduates went on to get jobs in the specific field they studied or occupations seemingly unrelated, the skills they learned in their undergraduate humanities classes proved to be useful on levels that I had not ever considered.

So I ended up completely shifting gears–leaving engineering and declaring a double major in English and Religious Studies by the start of my sophomore year, because I realized not only that I didn’t like chemical engineering enough to pursue a job in the field after graduation, but also that a degree in the humanities is no less useful than one in engineering. To date, I have learned skills in my English and Religious Studies classes that can be applicable to whatever job I desire them to be–just as engineering majors may graduate and go on to earn a masters in business, utilizing the skills underneath the surface that they learned in their engineering classes. The point is that, like technical math and science classes that teach time management and organization skills along with the specified content, classes in the humanities teach a broad range of skills that can be used even outside the realm of occupations that one would expect, say, an English major to obtain.

But most people outside the humanities don’t understand the choice I made to change my major. They can’t see the usefulness of switching to a more “risky” area of study. “Isn’t it scary not knowing what you’re going to do after your undergraduate studies?” they say. They think in terms of a formula; they see higher education as a process in which one earns a degree in some applicable subject and then goes out to get a job in the same field. But where does graduate school fit into this equation? If we earn an undergraduate degree in history and continue on to earn a masters in psychology, does this make the history degree useless? This mindset views people who choose career paths that are seemingly unrelated to their areas of study as having “wasted” their time in college. But if I’ve learned anything in my time with the humanities, it’s that the skills below the surface of the content–like how to better communicate with people or how to think critically–are meant to be applied to much more than just the original subject. These skills have turned out to be a broad set of tools that I can use to work in nearly any field. No matter what graduate degree I decide to pursue or what occupation I obtain after graduation, what I have learned during my time as an English and Religious Studies major will continue to be relevant.

So in response to the people who ask if it is scary to major in the humanities, I would simply say this: “There’s a world of endless possibilities. What’s so scary about that?”

1 thought on “What Would I Ever Do with a Humanities Degree?”