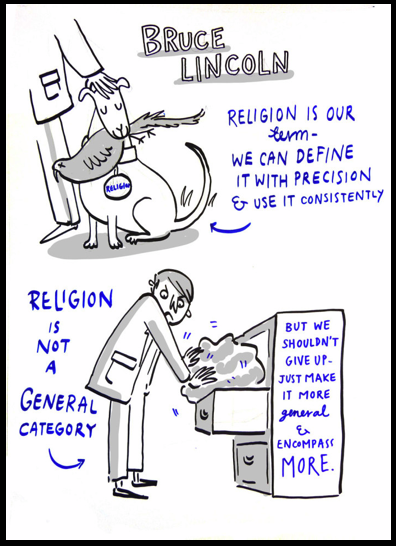 I’ve got a review essay coming out in 2015 in Numen (issue 62/1) that I just proofed. It’s on recent works concerned with the category religion. It was interesting to write, since it’s been twenty years since I wrote a similar essay on the category religion in scholarship. 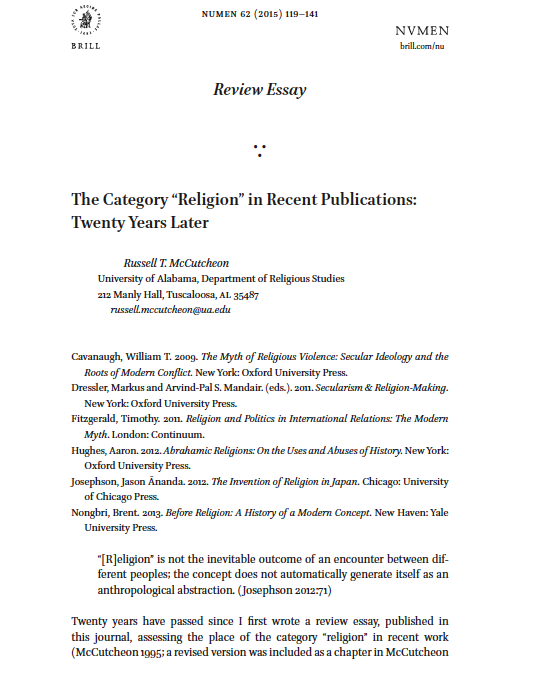 One of the interesting things that seems to have changed over the past two decades is that, in the early- to mid-1990s, there were very few works on the category religion and, instead, anyone interested in it needed to read how other scholars used the term and then start to do some analysis of their own.

Now, however, there are a number of works in circulation that are engaged in this very sort of analysis. They don’t all agree, of course; for example, Wilfred Cantwell Smith‘s early foray into this area — which posited an ahistorical, personal core (that he termed faith in transcendence) that is only subsequently expressed in the world (what he called the cumulative tradition) — is still alive and well (notably in studies of secularism that see religion as ancient and natural while only the secular state is seen as a recent, even artificial invention). But for those of us interested in studying how institutionalized classification systems help to make the world navigable and habitable, this explicit focus in recent scholarship on the success and function of this one Latin-based taxon should, I think, be read as a good sign.

But old problems persist nonetheless. Consider, for example, this recent post from The British Museum, describing a working group devoted to defining religion and studying its links to material artifacts. The post, written by a curator at the museum, open as follows:

Despite whatever gains in understanding the category religion that we consider to have been made these past twenty years, this statement hearkens back to a much older — and, obviously, still common — view that language is not up to the task of capturing the complexity of the thing we call religion. Like beauty, perhaps, it is hard to define because its object is so elusive, yet like the famous U.S. Supreme Court statement on defining obscenity: we know it when we see it. (For, despite the apparent problems with defining religion, this British Museum Project apparently somehow just knows that there was religious iconography — their term, not mine — long ago.) The nuance implied by putting the word religion in quotation marks is, in such cases, simply meant to signal that the term is just inadequate. Yet this is hardly why others of us use those quotation marks, of course.

One redeeming thing about the post, however, is found in Bruce Lincoln’s statements, posted as part of a novel series of drawings summarizing the seminar, an image that also appears at the top of this post. Whether or not one agrees with its continued use — as either an analytic or comparative category, that is, since using it as a first order descriptor of people who themselves talk about religion is, of course, uncontested — it is this question of ownership that, I think, needs addressing: whose category it is and thus recognizing the work that it does all depending who is using it.