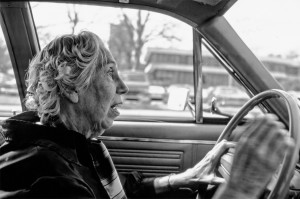 By Jared Powell
Jared Powell is a junior from Canton, Mississippi
majoring in English and Religious Studies.

I recently attended the first Hidden Humanities lecture, hosted by the College of Arts and Sciences, featuring Dr. William Ferris and his talk “Standing at the Crossroads: The Humanities and the American South.” The lecture struck a few chords with me–and not just because he also played a couple blues classics on a steel string guitar during the lecture–and got me thinking about what I understood to be two of Dr. Ferris’ main points: the importance of a sense of place to “Southern culture,” and memory as a tie that binds individuals together.

Dr. Ferris opened the lecture with a short discussion of famed Mississippi writer Eudora Welty. I, like Welty, was born in Jackson, and my family lived in the city for the first two years of my life before moving out to the suburbs. As pictures of Eudora flashed up on the projector screen during his talk, I leaned over to my friend sitting next to me and said, “When I lived in Jackson my house was only a few blocks from Welty’s house. She and my mom shopped at the same grocery store.” In fact, one of my earliest memories is a hazy view from my carseat of the Jitney Jungle through a car window.

The rest of the lecture moved through the narratives of various other figures in the Humanities from the South, but Dr. Ferris closed the lecture by again bringing the audience back to Eudora, showing some pictures, much like the one at the top of this post, of her driving her car through Jackson. Sure enough, in one of the pictures, on the far right of the frame, was the very grocery store from my childhood. Of course at this point I turned to my friend and said, “That’s it! That’s the one!” It should go without saying that I’ve probably never been that excited at a lecture before.

But why was I so excited? Why did I buy into the lecture so much?

I think now that it was because of some sense of a shared bond between the material, the lecturer, and myself–a bond that somehow allowed us to leave that room in Tuscaloosa, if only for a moment, and occupy some shared idea of home, of Mississippi. I knew that Dr. Ferris was also from Mississippi–he opened his lecture by mentioning that he was from Vicksburg (about 40 miles west of Jackson). However, I did not need to see a birth certificate or proof of residency to create this imagined bond of a common homeland. It was, instead, created through shared memories tied to our sense of place. In fact, the pictures of small town general stores used in the presentation resembled the general store that my own grandfather owned. The music he played was music that I grew up hearing, etc. Although we were born 40 miles apart, and at least that many years apart, we shared certain memories tied to the arbitrarily-drawn lines of the state of Mississippi, and these memories created this sense of kinship to the material for me.

We see this same phenomenon in the academic study of religion, I think, as well as other disciplines. Shared memories, symbols, rituals, etc., all tie individuals together into groups that are commonly called “religions”, “nations”, and “races.” This action of creating social bonds is at work in a congregation of Catholics brought together through the shared ritual of communion, or, as in my case at the lecture, between individuals who share the memory of a certain birthplace–maybe even a grocery store in the distance–as we drive by. Or maybe even the bond that takes place in Bryant-Denny stadium, on our own campus, when 101,821 strangers are brought together by shared colors, sayings, rituals, and memories.

I guess there’s more to doing the wave than just standing up and sitting down.

And sometimes attending a lecture is more than just sitting in a room and listening to a speaker.