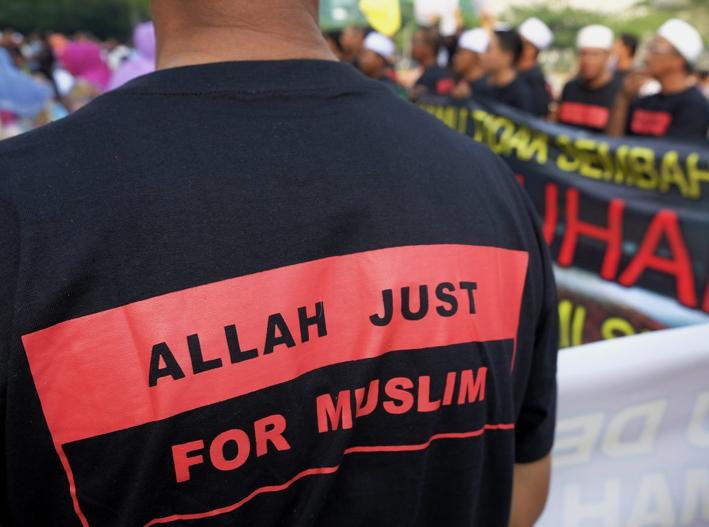 This news story reminded me of teaching long ago, and trying to persuade students that “God” was not necessarily a generic, cross-cultural, trans-historical term but, instead, usually carried with it (as do all words) a specific baggage (e.g., the Christian doctrine of trinity, the role of Jesus, specific ideas of heaven and salvation, the bible, etc.) — an argument not that different from trying to persuade students that “man” is not necessarily a universal designator for all human beings (i.e., introducing them to the issue of gender inclusive language).

For the story opens: 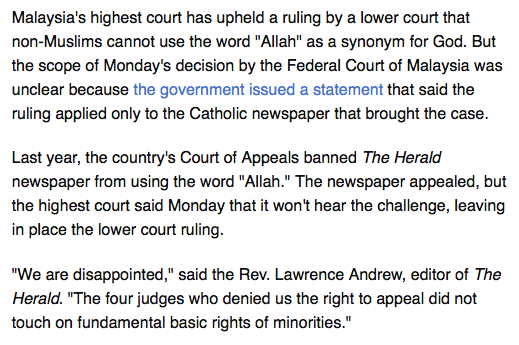 What’s the issue? Well, according to another site (which has far more detailed information on the issue), quoting a Malaysian government minister:

So words play a role in all this, since I have trouble imagining a lot of English-speaking Christians being comfortable with someone using “Allah” to translate their local term “God,” since — at least for them — each term means and entails a certain thing, operates within a specific socio-semantic universe, is more than likely related to the other in some ranked or normative manner (i.e., “their name for God is Allah” or maybe “theirs is a false god” or some such claim), and thus they are — again, at least for those particular insiders — seen to be hardly interchangeable.

Or, to rephrase, invoking one to re-name the other is likely seen as a power move by many people — one they’ll either assert or resist, all depending on their situation and interests.

But what does a local person who speaks a language in which the word “Allah” might be a standard or at least familiar item of vocabulary, but who is a Christian, call the protagonist of their text? How would you translate the Christian bible to make it relevant for such a reader while not confusing them concerning distinctions that are likely of importance to you? And if you were Muslim and saw “Allah” being used in non-Muslim texts, what would you think?

Now these are real quandaries to some and it isn’t difficult to imagine a government getting involved to manage the potential ramifications of using words.