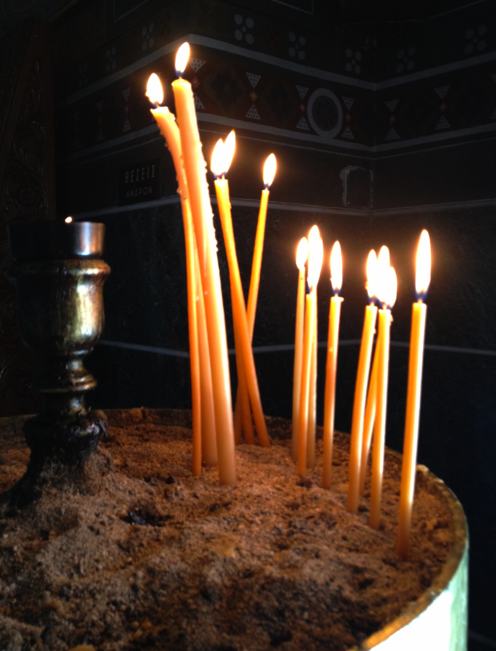 A portion of it collapsed under the weight of the locks.

It made me think of the first time that I visited Greece with students, on a study abroad trip back in 2008, when we attended a service at a small Greek Orthodox church in the upper old city of Thessaloniki, at the St. Vlatadon monastery. All throughout the ceremony people would arrive, light a candle, place it in the container’s sand, and then kiss an icon before taking a seat. Although a small church, the candles eventually became crowded, and of course each gradually burned down as well. And then the interesting thing happened. A fellow who worked in the church as what I might call the warden (or, thanks to our former instructor, Vaia Touna, what we could call the νεωκόρος [neókoros; the young sweeper, or caretaker])  — working behind the scenes as it were, though doing so in plain sight — walked up, collected a handful of candles in a no-nonsense manner, inverted the bunch of them into the sand to extinguish them, then threw them away.

It was an amazing counterpoint to the apparent solemnity of the ceremony, for all throughout the service he’d reappear, from time to time, to make room for the new by clearing away the old. And, of course, nobody minded. For we all know — don’t we? — that someone has to stay behind to sweep up after we’re gone. That is, it takes ingenuity and labor to make things seem like they don’t take ingenuity and labor, to make delimited, contingent things appear to us as limitless and permanent.

Sadly, in my experience students of the study of religion are often so fascinated by the appearance of solemnity that they fail to see the mundane, missing out on the practical conditions that make it possible to, in this case, reverentially light a candle and kiss and icon. That is, they fail to see that the so-called sacred and the profane are two sides of the same coin — the creation of the set apart zone requiring labor carried out in the domain known as the other. At least a well functioning social system would work in that manner, one in which there’s always room for your candle.

Which brings me back to the City of Lights. What the Parisian public works department seems not to recognize, but which the members of that church in Thessaloniki more than understand, is that, for ritual participants, the act of placing the lock (or the candle) is what it’s all about, not returning later, with precise GPS coordinates, to make sure it’s still there. After all, there’s plenty of fences all over the place where you can instead put your lock, make your mark, so that it is all by itself and thus forever distinguishable. But that’s likely not what it’s about at the Pont des Arts bridge.

So when there’s only so much fencing at some desired location, only so much room in the sand, it is the job of the behind-the-scenes crews to work in plain sight (preferably not with the BBC News cameras running though) to create the illusion that it is limitless.

For we’re all be too busy just looking for a free spot for our lock, a place for our candle, content just to see locks and candles, in the plural, knowing that we’re part of it.