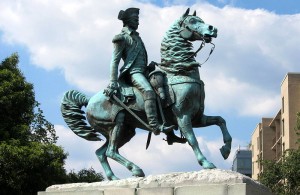 In an online article titled “The George Washington You Never Knew”, the author constructs a different, more personal Washington. The author’s own construction of who his “Washington” is includes a poor speaker, a dictator, even a master of espionage. The author is trying to emphasize a view of his “Washington” that few ever see. Challenging the idea of who George Washington was and who the man continues to be perceived as raises the question: do we ever truly know who a historical figure was? Are our own agendas and purposes being thrust upon these symbolic people without us even realizing it? The idea of George Washington is more than just a man who was alive in 1776; it’s a symbol that we construct out of our own consciousness and project ideas, motives, and agendas onto.

Those of us asked to describe George Washington in one word would be asked to describe their own “Washington”, not the physical man but what the man means to us personally. Some would likely say the hero, leader, patriot, etc. Few would ever say something harsh or disrespectful about the father of our country because that is the “Washington” we have all been introduced to by those in power. If I were given the opportunity to ask George Washington himself a personal question, face to face, would I be getting the whole truth, or just what George Washington wants me to take? Even George Washington himself would be presenting his own idea of his own self that he leaves for me to take and interpret. Information is filtered through a person’s own thoughts and then perceived by someone else. Imagine history doing the same thing; first being acted out, then recorded, then learned, then told, and then repeated throughout time.

Allowing sources to construct our own ideas for us is somewhat problematic because we aren’t coming to our own natural thoughts or conclusions. People are influenced by what sources have chosen to present to us through the filter of someone else’s own agenda. The amount of filters that sources go through over time only allows us to see a piece of the pie so to speak. The authors of these sources are in control of what is recorded, excluded, and even sometimes fabricated. Constructing a mythic “Washington” gives the author the ability to control what people perceive him as and what people think about. Is history just fiction told from someone else’s perspective?