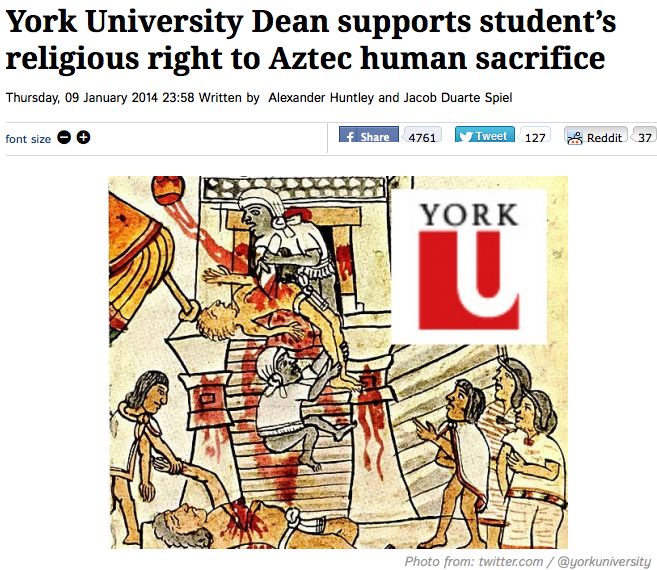 Did you catch the story, the other day, of the Canadian University in which religious identity and gender-inclusion ran straight into each other and the former seems to have prevailed? As reported in the newspaper, The Toronto Star, the story opens:

A York University student who refused to do group work with women for religious reasons has sparked a human rights tug-of-war between a professor and campus administration.

While the professor wanted to deny the student’s request, a university dean ordered him to comply.

What’s particularly interesting to me is how a parody of this administrator’s deferral to a student’s “firm religious beliefs” immediately sprang up, pictured above, which opens as follows:

TORONTO – After permitting a student to be excused from course work on religious grounds so he would not have to publicly interact with female peers, the Dean of York University is also permitting another student to have the right to ritually murder people to appease his gods.

“We are legally obliged to heed to the student’s wishes of human sacrifice” said Dr. Martin Singer, Dean of the faculty of Arts and Science at the university. “This wouldn’t affect many students as the festival of Tlacaxipehualiztli only lasts 20 days to celebrate the spring equinox and sometimes occurs during reading week. Additionally, the student has assured me that obsidian blades are so sharp that you will barely feel them.”

The two stories — one real, one a parody — nicely put on the table the often undisclosed and discussed limits of liberal inclusion. For while tolerating human sacrifice obviously seems pretty far-fetched, there’s all sorts of things people do that only local groups take as normal and proper, and many of those are easily classified as religious.

So the question, then, is how does one navigate all this in a modern, diverse liberal democracy? Is the religious identification the ultimate trump card in all cases (“Well, it’s my religion!”) or is this claim but one among many interests and designations that come to the table? If the former, then how does one manage all the various religious claims that themselves conflict (by calling some “cults” maybe, and then banishing them?). But if the latter, then what system of adjudication would one invent to balance the variety of (sometimes contradictory, often competing) interests that comprise day-to-day public life?

One thought on ““Firm Religious Beliefs””