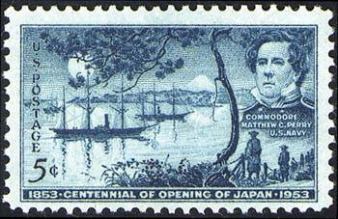 Did you know that January 1st is also the beginning of the new year in Japanese Shinto, marked by celebrating the holiday known as Gantan-sai?

To understand the overlap of dates we’d have to dig into the adoption in Japan of the Gregorian calendar, during the so-called Meiji Reform (begun formally in 1868), part of what some refer to as the “opening up” of Japan to North American and European trade and thus influence. Sooner of later that discussion would bring us all the way back to the U.S.’s Commodore Perry (pictured above in that centennial stamp) and his fleet of warships that arrived in the bay at Edo (the city later known as Tokyo) in 1853, to “persuade” the Japanese that trade with the U.S. was in their best interest.

And with all the changes that the Meiji period brought to the island of Japan, a new calendar was one of them.

By the way, that’s why I find the academic study of religion to be so interesting. For understanding these things we call religions as simply part of the mundane (but always fascinating) tug-and-pull of day-to-day life means that realizing that tomorrow also marks the new year in Shinto invites us to dig a little deeper, to make sense of what at first simply seems to be a cross-cultural coincidence.