When I chose the University of Alabama for my undergraduate education, I wanted a place where I could study my three main interests – computers, religion, and business. Beginning as a CS major, I quickly learned that computer programming was not the path to happiness for me. As I sought a new major, I looked back at the religious studies courses that I had already taken – REL 100 (World Religions) with Jon Berry, REL 112 (Intro to New Testament) with Pat Green, and REL 124 (Religion in America) with Ted Trost. In realizing that I had taken a Religious Studies course each semester of my own volition, I thought that it might just be the major that I had been looking for.

As I talked with my friends on campus, I realized that I was one of the few people who truly enjoyed their major. After all, most people couldn’t get away with writing papers on “Luke Skywalker: Christ figure,” “Dueling Saviors: Crash Davis and Annie Savoy,” and “Alabama Football as the Ideal Church.” I was in a major that allowed me to be creative and apply concepts in a sometimes bizarre way, yet continued to guide me in asking the questions of existence at the center of my personal and professional journey.

After graduating, I moved on to Candler School of Theology, where I earned a Masters of Divinity on May 15th, 2006. Because of my background in academic approaches to religion, I was able to take advanced classes far quicker than most of my classmates, thereby allowing me to focus on my interest in Systematic Theology and enabling me to write a thesis focusing on Dietrich Bonhoeffer’s Christo-Ecclesial Foundation. In June 2006, I began serving as the associate pastor at First United Methodist Church in Cullman, Alabama, the week after I celebrated my first wedding anniversary with my wife Amanda, who was a Psychology major at the University.

My favorite professor in Religious Studies was Ted Trost, who was one of the primary reasons that I became a Religious Studies major. Following him was Jon Berry, with whom I spent several nights talking outside Parker-Adams, where he was the house-master for the first year of the Blount Undergraduate Initiative. Each of my classes in the department helped form who I have become, and I would encourage anyone who asked me to consider Religious Studies as a major or minor. 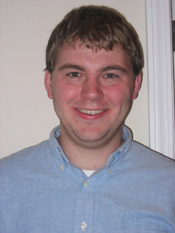