I was pleased to hear from you and to read of your activity. Your letter stirred fond memories and inspired me to delve into notes and papers that I had saved from my years at the University of Alabama. Those were exciting years to me. Having married when I was but sixteen, I had not even a high school diploma when I was widowed at forty-six. Within months of my husband’s death, I had earned my GED and enrolled in Walker College. Two years later I was a student at the University of Alabama and, to provide housing and income, I worked as housemother at Theta Chi fraternity.

I remained in those endeavors, finding great joy in both, until I had earned a Bachelor of Arts in 1973 and a Master’s in 1974. During my years as a wife and mother, my sole intellectual outlet had been through the church (no television, no telephone for much of the time, very little transportation). I studied the Bible; I enrolled in Bible study courses. An avid student, I was tutored by some learned pastors and teachers. Naturally, when I reached the University of Alabama, I enrolled in a class in religion. This class, with Dr. Pat Green, was the most stimulating, thought-provoking class I had yet encountered. Dr. Green gave greater meaning to the biblical knowledge I already possessed. (For example: the story of the parting of the Red Sea is not just a story of a miracle, but a story exemplifying the power of faith—putting one foot in front of the other in a situation that seems impossible.)

So many years older than every other person in the class, I was gratified that Dr. Green accepted me and valued my life experiences and opinions. I loved the class, my classmates and Dr. Green. Other classes and other professors in the department followed: Dr. Weinberg’s class was among them. Through all the classes, as well as the entire university experience, I gained personal comfort, breadth, and a greater appreciation of all faiths.

My life was further enriched after graduation when I was able to share with other, younger people whose consciousness, too, was raised. I taught a class in Religious Studies at Walker College and worked as a counselor there. Later I designed and directed a program for Bevill State that sought to ease the transition for homemakers into the mainstream of society.

After my retirement, I remarried. My husband, James Dalton, and I presently live in DeFuniak Springs, Florida, but I make frequent visits to my home in Goodsprings.

(Written for my mother, Nell Perry Earnest Dalton, and with her collaboration, by Brenda Cummings July 4, 2003) 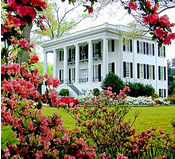