Matthew Satcher, a double major in religious studies and philosophy, had his philosophy honors thesis published in the April 2006 issue of Dialogue, a scholarly journal for undergraduate and graduate students in philosophy. His essay, entitled “Proper Function Theory, Religious Exclusivism and the Challenge of Religious Diversity,” is a rebuttal to Alvin Plantinga’s “A Defense of Religious Exclusivism,” a topic Matthew first tackled in his final project for Catherine Roach’s REL 344 “God and Moral Reasoning” class. An earlier draft of his thesis won the Alabama Philosophical Society’s 2004 Student Essay Competition. Matthew presented the paper at their conference in Mobile in October 2004, a trip funded by the Religious Studies department. Matthew will graduate in May and begin medical school at the University of Alabama School of Medicine in the fall. 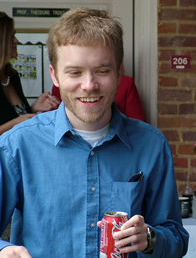