Inspired by Prof. William Doty’s Blount Undergraduate Initiative class on Joseph Campbell’s work on myth, Kim Davis soon found herself an REL and French double major. In addition, she worked part-time in the Department’s main office from May 2003 until August 2004.

As the Department’s webmistress extraordinaire, main office assistant, and always enthusiastic “Jill-of-All-Trades,” Kim was directly responsible for much of the content and format of this site, as well as being responsible for taking the lead on such projects as Department mugs and t-shirts. In carrying out these duties, she significantly helped the Department to reinvent itself.

Kim is currently working with the Blount Undergraduate Initiative as a Teaching Assistant, while finishing her M.A. in French Linguistics. She also lives in the Blount Living Learning Center where she mentors young students in their academic affairs and organizes a drama production or two each semester. In her spare time, she also is involved with the Alabama Academy of Irish Dance in Birmingham and teaches an Irish dance class in Tuscaloosa.

Kim has this to say about the department:
“The Department of Religious Studies became home away from home for me. As a student, the department was a fun, exciting, and intellectually stimulating environment. The professors were encouraging and respectful. I felt as if I was a colleague-in-training rather than a lowly undergrad. As a worker, I was treated with so much respect and I loved coming to work every day. I loved this department so much that I sent them my little brother! I would definitely recommend this major to anyone who asked me if they should major in Religious Studies.” 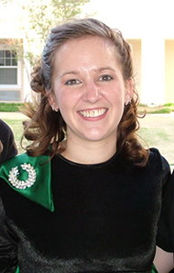