One of the most useful pieces of advice that I have ever received came from a few of my professors in the Department of Religious Studies at the University of Alabama. I was told that, while pursuing my Masters at Georgia State University, one of the most important things to do was to work on professionalizing myself. It is not enough, I was told, for a graduate student to attend classes, read texts, and write papers (the normal work of a student). Instead, as a graduate student looking toward the future, it is important to make yourself a part of the field. One must let your professors know that you are more than just a student; you are a colleague-in-training.

With this in mind I decided to attend the national meeting of the American Academy of Religion (AAR), the U.S. field’s main professional association. This year the annual meeting was held in Philadelphia, PA, the weekend before Thanksgiving. Upon arriving in Philadelphia I went straight to my hotel to drop off my bags and then off to the Convention Center to see what this conference was all about. The first thing that struck me was the sheer size of the whole thing. There were always meetings or lectures taking place, and everywhere you looked you could see scholars of Religious Studies chatting it up in the hallways. It was a great comfort to realize that there were hundreds of people who were interested in the same area of study as me.

The atmosphere was very inviting and, after a short time, I was able to walk up to strangers and introduce myself so that a conversation could begin. Going to the AAR was an opportunity to see the different people who contribute to the field. It was an opportunity to sample some of the new research that scholars are doing and also a window into the “hot topics” that are currently lighting up the field. I enjoyed being able to meet scholars with whom I might potentially be interested in doing my Ph.D. work. Talking with scholars was a way for me to see what they were interested in and how they went about their research, etc., as well as a way for them to meet me and hear about some of the things which interest me.

On a more personal level, the AAR’s annual meeting was a time when I was able to catch up with old friends. I was able to connect with several of the professors that I had during my undergraduate work at the University of Alabama. It was nice to see how life in Tuscaloosa was treating everyone and also an opportunity to meet my professors as friends and associates instead of as teachers. I was also able to meet up with a few graduate students that I met on a University of Alabama sponsored trip to a conference at the University of Syracuse. All in all, the national AAR conference gave me a glimpse into the professional life that I would like to lead. It was a time and a place to meet with others within the field and discuss issues important to us all.

After attending the conference I realized just how important my time in the Department of Religious Studies at the University of Alabama had been. My time at Alabama was essential in preparing me for the academic side of graduate work, as well as the social and professional aspects of the field.

Readers may be interested to know that, at the 2005 meeting of the AAR, Christine was appointed as the editorial assistant to Jeff Ruff (of Marshall University), editor of the international quarterly journal, Method & Theory in the Study of Religion, published in the Netherlands. Congratulations, Christine! 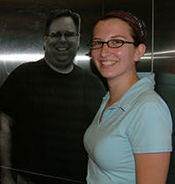